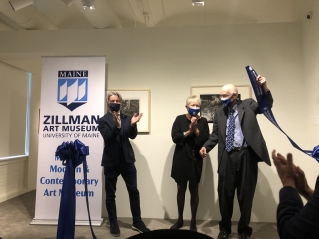 BANGOR – The Zillman Art Museum (ZAM) at the University of Maine has opened five new galleries.

The museum, located at 40 Harlow Street, has been a stronghold of the Bangor art scene since its relocation from the UMaine campus in 2002. The museum’s only floor has featured both exhibits and pieces from the permanent collection of the museum, with Andy Warhol, Pablo Picasso and Andrew Wyeth taking turns in the galleries.

Of course, such great works of art need leeway. Following a generous donation from Don and Linda Zillman, as well as the support of local benefactors, the museum has grown. A newly renovated second floor opened to the public on Saturday. â€œSeeing this vision come true is an important step for the museum, one that will contribute to our continued growth as an institution,â€ said George Kinghorn, Executive Director and Curator of ZAM, at Thursday’s inauguration.

It is a remarkable collection of art. If you enter on the first floor you will begin your tour at the Sidney Russell Exhibition The big point, where a nine foot tall Hawaiian shirt fills the wall. Russell sewed gargantuan clothes. There’s a boot here, a backpack there, pants and shirts, and oversized lingerie. Each piece has been hand painted to a disconcerting level of realism – it looks like you can carry these clothes, if only you were tall enough. You are forced to imagine the body that could fill them. It’s alarming, like you have to get the hell out of that clothes closet before the giant returns.

Exhibition by photographer Amy Stein, Domesticated, is just as surreal. In one photo, a coyote howls at a street light. In another, a black bear head is caught in a plastic bag. A wolf walks towards a child. A dead-eyed fawn looks between seedlings in a greenhouse. These are strange encounters between an organic world and an artificial world, and they are alarming. Why does no one tear off the child, free the bear, put things back in their place? Why is Stein there to take pictures?

Answer: Animals look dead because they’re, well, dead. Stein used taxidermized animals to stage these scenes – the ultimate domestication. According to Stein, the photos are based on actual events that took place between 2005 and 2008 around Matamoras, Pennsylvania. Still, Stein recreated the events using preserved animal corpses. They are strange and rigid objects, and they pose no threat to the photographer – a meta-narrative that becomes the most disturbing aspect of Domesticated.

The manipulation of nature is also at the center of Emily Eveleth’s series of paintings. Possessive future. Entering this exhibition is like stepping into a detective story from the Golden Age. Here are dark figures and white shirt sleeves, blinding lights and deep shadows. Take the huge board Present imperative, in which a man in a tuxedo is lying next to a terrestrial globe, while a figure in the foreground wields another globe like a weapon. Or painting Possessive determiner, created especially for the ZAM exhibition, which represents the globe as a target in a game of billiards. There is a mime lurking in the background. He feels dangerous.

Eveleth shrinks the planet to a size that can be hand-held, groped, abused. And the gloved figures in his paintings are cavaliers in their use of these little worlds. Yes that would be easy to take Possessive future simply as an environmental commentary – which it is undeniably, and provocative – but which would downplay the narrative power of Eveleth’s work. You are in a detective story and the plot is unclear. Is the lying man unconscious or dead? Are these people victims, conspirators or something else? And why, then help me, is there a mime?

Other exhibits include that of Anne Arnold The soul of it, Shona macdonald tender earth, and the savage of the photographer Roman Franc Look at The Birdie! Exhibitions Inflorescence and Open goal presents selections from ZAM’s permanent collection.

On the way out, don’t miss the exhibition under the stairs, showcasing local talent: the artists of Bangor High School. Discover Haley Metzger Midnight Zoom call, an ink work depicting an assemblage of forest animals. The naughty little guys are enchanting. This is the raison d’Ãªtre of the new Zillman Art Museum: to bring together good art in Bangor, both inside and out.

(The Zillman Art Museum is open to the public from 10 a.m. to 5 p.m. Tuesday through Saturday. For more information about ZAM and its offerings, visit their website at zam.umaine.edu.)

Visit these Manatee County museums for free on Museum Day 2021

Opinion: The recovery will be weak if small businesses cannot get the credit they need and deserve