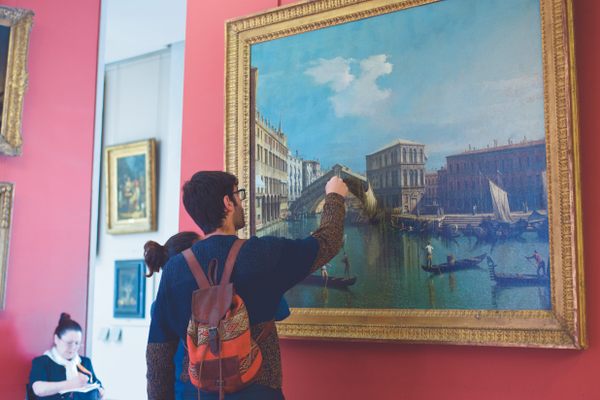 You walk in a museum when a work of art seems to speak to you. It may be a bowl, smooth and detailed with shiny gold leaf. It may be a statue of Venus, her hand outstretched. You walk towards this alluring object. You lean as close as possible.

Why is it so tempting to just reach out and touch it?

Fiona Candlin, professor of museology at Birkbeck College London, has been asking this question for more than 20 years. Candlin worked at Tate Liverpool in the early 2000s when the UK’s Disability Discrimination Act was first passed. Thanks to the new law, museums across the country began to think more about how to make exhibits more accessible to the visually impaired, and Candlin found herself unhappy with the results.

“I thought a lot of the things they put on were so symbolic,” she says. “He didn’t start thinking about how we might encounter things by touching them.” Candlin therefore embarked on her own journey of observational research. In short, she says, “I spent a lot of time sitting in galleries, watching people touch things.”

In 2004 and 2005, Candlin wandered the British Museum, keeping an eye out for what she calls “unauthorized discreet contact”. The results of this study, recently published in The senses and society– reads like a catalog of little secret intimacies. (Candlin also wrote a book on the subject, titled Art, Museums and Touch.) Visitors clap bowls, lean on plinths, and trace hieroglyphics with their fingers. They pat the head of the horse of Halikarnassos, caress the belly of Septimius Severus and try to give sweets to the Dog of Alcibiades. A young boy in the Egyptian Sculpture Gallery spends time shadowboxing the disembodied forearm of Amenhotep III, ending the fight with a gentle punch.

Meanwhile, sympathetic but harassed assistants bemoan the failure to enforce gallery rules, which, they say, many visitors aren’t even aware of. “You stop a hundred people from touching and there are two hundred more,” one told Candlin. “It’s like trying to turn back the sea.”

Most museum visits remain a primarily visual experience. Exhibits are usually “on view” or “on display,” and visitors learn about historical and artistic objects by reading programs, plaques, and legends. But in recent decades, more and more museums have made an effort to include additional senses: many offer tours for the visually impaired, and some have become more experimental, concocting chocolates themed around particular exhibits or creating scratch-and-sniff versions of paints. . But touch, in particular, is usually relegated to particular areas, like the Touch Gallery at the Louvre or the Hands On offices at the British Museum.

That hasn’t always been the case, Candlin says. Cabinets of curiosities, which appeared in Renaissance Europe and are often considered the predecessors of the museum, were intended to be open; when people visited them, Candlin says, “they would have handled things and talked about it.” As these private collections influenced public institutions – or, like the British Museum, became public institutions – they first brought this spirit of openness. “There are 18th century diary entries of people visiting the British Museum and being able to pick up the objects,” Candlin explains.

But as museums grew, it became unsustainable. “When you have four million visitors a year, you can hardly get everyone to touch anything,” Candlin says. People are clumsy, our hands are greasy and dirty, and we like to wear rings and watches which, applied forcefully to a delicate object, might as well be truncheons. As such, although smaller museums still sometimes encourage visitors to interact with their objects, larger ones tend to present themselves as hands-off except in controlled situations and places.

And yet, we all do it anyway. A new Tumblr by photographer Stefan Draschan, selections of which illustrate this article, is full of people stealing paintings. Sometimes the transgression goes further, as with the famous “restoration” of the Ecce Homo or the crossword collage, hanging in the Neues Museum Nürnberg, which a visitor tried to solve. “If unauthorized touch is taken into account… it is clear that many museums are far more multi-sensory than is commonly recognized,” Candlin writes.

Ultimately, the question may be why, across centuries and places, are we so reluctant to keep our hands to ourselves? Those interviewed by Candlin had a number of excuses. Some claimed to do this to ensure the artifacts were real. Others thought the lack of display cases in some galleries of the British Museum meant that everything was fair game. At least one guest cited the apparent sturdiness of the ancient artifacts: “The sarcophagus…it’s so sturdy,” she told Candlin. “It’s made to last.”

But Candlin thinks there is a larger truth underlying these pretexts. “I think you can’t really learn about things unless you manage them,” she says. “It makes a difference.” Visitors told him that they wanted to feel the depth of an engraving, or the softness of a monument, in order to better understand and appreciate the art of its realization. “I don’t think an IKEA product would be like this after 3,000 years,” one interviewee said of a well-chiselled sarcophagus.

Some people who touched things even went so far as to express new empathy for the people doing the work. After touching a sculpture that didn’t go as deep as it looked, a guest shared with Candlin what he imagined of the worker’s thoughts: “My God, it’s hot in here, it’s is hard work and all they gave me was a bag of rice.”

In this way, touch, Candlin says, is “part of a much larger, more imaginative encounter with things – trying to somehow get in touch with the past.” And there are countless ways to facilitate this type of contact, it seems. Recently, she says, a former curator at the British Museum told her about a visitor who entered the gallery of Egyptian sculptures and left boxes of cat food as an offering to the lion-headed goddess Sekhmet. . “In terms of weirdness, that one beats touch,” Candlin says.

Candlin recalls one of his own (authorized) encounters, with a stone hand ax at a handling desk in the British Museum. “When I picked it up it was sitting really well [in my hand],” she said. “You had the feeling that whoever did it had a hand like yours. Then the woman at the reception said, ‘Do you realize that the person who did that wasn’t even the same kind of human as you?”

The axe, made tens of thousands of years ago, is one of the oldest things the museum has. “This object somehow crossed this great gulf of time,” Candlin continues. “You are on one side, this other person is on the other. It’s an imaginative leap, but the object helps you do it. It’s a powerful way to build a relationship, and she returned to it many times during her own visits to the museum. “I always want to touch things,” she says. “And sometimes I do.”

We visited the science museums of Germany