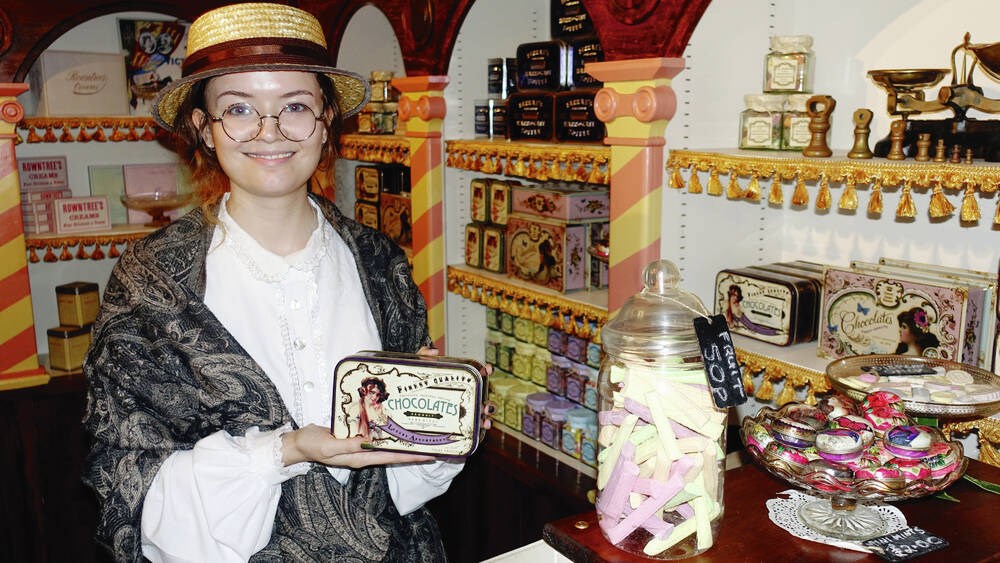 York is the most interesting stopover between London and Edinburgh, offering plenty of opportunities to travel back in time.

I follow Edwin on a walk through York — the most interesting stop between London and Edinburgh. Edwin is a vivacious retired teacher who stays active by leading city walks and organizing private tours. Today he’s showing me around to illustrate why, in his mind, York is such a fascinating city.

Edwin and I head to York Castle Museum, where English memorabilia from the 18th, 19th and early 20th centuries are cleverly displayed in a huge collection of craft shops, old shops and old-world parlors. Charles Dickens would feel right at home here. As the towns modernized in the 1930s, museum founder Dr. Kirk recognized a threat to their heritage and rounded up entire stores and reassembled them here. In Kirkgate, the most popular section of the museum, we stroll down a century-old street in Lincolnshire, to see the butcher, baker, coppersmith and barber.

Stores are stocked with the actual merchandise of the day. In the confectionery, we listen to English grannies giggle and reminisce about their way through the tantalizing world of ‘spicy pigs’, ‘togo balls’, ‘humbugs’ and ‘conversation lozenges’. The general store is stocked with groceries, the toy store has old games, and the sports store has everything you need to play archery, cricket, or 19th-century bowling. Anyone for ping-pong? These Victorians loved their “puff puff”.

In the period rooms, three centuries of Yorkshire parlors and clothing paint a warm picture of life centered around the hearth. A peat fire warms an enormous brass kettle, while the aroma of freshly baked bread fills a room under heavy beamed ceilings.

Dr Kirk’s ‘memorable collection of the past’ is the closest thing in Britain to a time tunnel experience, except perhaps our next destination, the Jorvik Viking Center just down the road .

A thousand years ago, York was a thriving Viking settlement called Jorvik (YOR-vik). Although only traces of most Viking settlements remain, Jorvik is a boon to archaeologists, the best-preserved Viking city ever excavated. Sail Disney’s Pirates of the Caribbean houseboat 1,000 miles and 1,000 years back, and you get Jorvik.

More of a carousel than a museum, this exhibit showcases the bountiful harvest of this dig into the intelligence of the theme park. We drive 12 minutes in a kid-friendly people carrier through the recreated Viking Street of Coppergate. It is 975 and we are in the village of Jorvik. Everything – sights, sounds, even smells – has been carefully reproduced.

Next, our time-traveling train passes through the actual excavation site, past the remains that inspired the reconstructed village. Scraps of buildings, piles of charred wood and broken pottery are the time-worn remnants of a once bustling city. Everything is true to the original dig. Even the face of one of the mannequins was computer modeled from a skull unearthed right here.

Next, Edwin and I cross the river towards the imposing York Minster, stopping first at the romantic ruins of St. Mary’s Abbey. A frail arcade of pointed Gothic arches seems to hang from the branches of the trees which dominate. I point out to Edwin that it is striking how beautifully the cathedral survives while only one wall of this abbey church is still standing. Edwin explains that Henry VIII, so threatened by the power of the Pope, destroyed almost everything Catholic – except the great minster in York. Fortunately, Henry needed a northern capital for his Anglican Church.

Edwin then explains the dissolution of the monasteries. “Henry wanted more than a divorce. He wanted freedom from the power of abbots and monasteries and the pope in Rome. This was our first Brexit – and we got it in 1534.” Then, playfully describing two (maybe three) explosive leaders at the same time, he says: “He was led by a very married, arrogant and overweight egomaniac.”

Edwin plays with me, alluding to my then president, but he also describes the pompous pro-Brexit British Prime Minister Boris Johnson, as well as Henry VIII. While 500 years apart, they both wanted to “be free” from Europe (from the Pope and the EU), which also meant no longer sending money to Europe (in tithes to the ‘Roman Catholic Church at the time or in taxes in Brussels today). And they wanted no more European intrusions into their kingdom. In the 16th century under Henry and in the 21st century under Boris, for Great Britain, “to leave means to leave”.

As I say goodbye to Edwin, I am reminded that the more you know about a historic city, the more interesting and worthwhile your visit becomes.

This article was adapted from Rick’s new book, For the love of Europe.

Library offering passes to the Columbus Museum of Art

After decades of planning, an art museum finally opens in Osaka