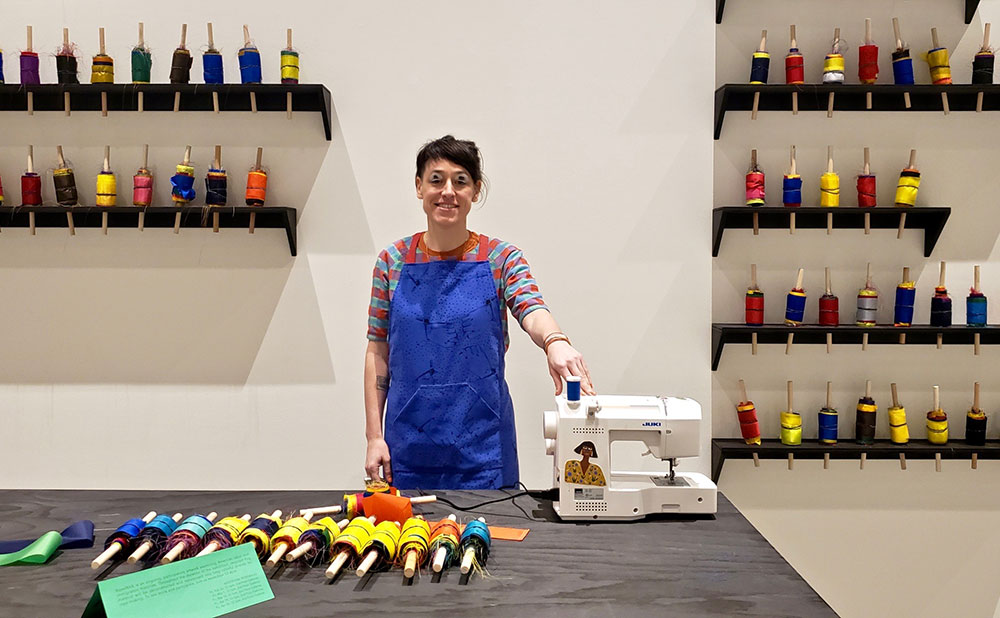 CINCINNATI, Ohio – Intermedia artist Lindsey Whittle presents her artist statement for Archive as Action — a performance for three women at the Cincinnati Center for Contemporary Art – with a retelling of the Hindu parable about three blind people who encounter an elephant. One grabs the tail and thinks it’s a snake; you put your hands on the leg and you think it’s a tree; you touch the ear and you think it’s a bird.

“Individually these people don’t really understand what an elephant is,” writes Whittle, “but all together they start to get to the bottom of something.”

Whittle describes this history as a cohesive basis for her as an artist, and it certainly serves as an excellent metaphor for the exhibition in three galleries she shares with Amanda Curreri and Calcagno Cullen – all of which capture the enormity of the world. participatory art as a mechanism for societal impact from different and very colorful angles.

Artist Lindsey Whittle, wearing a pair of interactive glasses that invite viewers to engage face-to-face with the artist and navigate the space in this position.

Although the art of social practice is nothing new, there is a specific and refreshing type of dynamism to Archive as action, which suggests, from title to implementation, a necessary and kinetic element that must be present for art to generate change. Many artists are content to raise questions with their work, but Cullen — who also hosts community-based, artist-run art space Wave Pool in Cincinnati’s Camp Washington neighborhood — seems solely dedicated to listening. some answers.

“For me, that’s my artistic practice, really that kind of bonding and community collaborations,” Cullen said, during a guided tour with Hyperallergic at the CAC. “So I wanted to find a way to make that visible in a museum – to create a space where events happen, people come together, co-work [on Thursdays]community asset mapping…simply create a space that can be activated.

Artist Calcagano Cullen, explaining various past projects and current lineup, depicted in a wall-sized mind map on one side of his exhibition space

The Cullen section of the exhibit is dominated by a giant table assembled from collected woodwork – doors, desks, sideboards, drawing boards – all leveled and glued into a roughly single entity around which a series of discussions, meals and activities take place throughout the exhibition. Course. Apart from these special events, the table hosts a letter writing station, on which visitors can type letters to send to random recipients – an extension of an ongoing project by Cullen, in which she sends letters to random people listed in the NYC white pages. , the first 500 of which have been collected into a book – along with an answering machine ready to receive messages from people about “the last time you met someone new”.

“Let it ring! The machine will get it,” directs a prompt written on the table next to the answering machine, contrary to the exhortation “Pick it up! Pick up!” written on the wall next to a grid of old-fashioned rotary dial telephones that are dimensional part of a giant wall-sized mind map visualizing Cullen’s process and projects in drawings animations and handwriting.

Visitors play with an adding machine and calculations page to generate your happiness percentage, based on a complex algorithm provided by Cullen on the wall.

Standing at Cullen’s telephone bank, perhaps reveling in twisting one of those long plastic telephone cords around your finger as you hold the receiver to your ear (a sensory memory that only targets those who are sitting on or before the millennial dawn of wireless technology), the next eye-catching piece of the show is a wall of colorful reels, arranged on stakes reaching to the top of one of the CAC’s vaulted galleries. This is a work by Amanda Curreri, and the most interactive aspect of her part of the exhibit. During scheduled “rope walking” periods, Curerri and his team of facilitators – drawn from his cohort of students at the School of Art at the College of Design, Architecture, Art and Planning (DAAP ) from the University of Cincinnati, where she teaches – use these spools and draw small cohorts of visitors into a roughly half-hour process of braiding long strands of colored rope. The strands of rope are made from patchwork scraps sourced from the National Flag Company of Cincinnati – at 150 years old, one of the nation’s oldest flag makers – and this process harkens back to an equally archaic time when the best manufacturing technology required to twist rope from full-length fiber components. Curreri leverages CAC’s open floor plan to engage visitors in a highly physical process that involves collaboration, teamwork and, ideally, conversation.

Completed rope works pile up on the gallery wall in Curreri’s exhibition space.

” Fatherhood [of the work] merges, I guess,” Curreri said, “but maybe it’s leveraging aesthetics — like formal and abstract potential with color. It’s not boxed in, it’s not the English language – which is the language of capitalism – so maybe there are ways to negotiate meaning and find new ways to have conversations that I want to have, or normally traveling in a really specific, linear direction.

Curerri finds that moving bodies, sweating, and making decisions in artistic creation loosens the scope of interactional possibilities. The work in the exhibition slowly accumulates in a wall hung with braids created during rope-walking sessions, which anchor some of Curreri’s other works on display, many of which involve a fiber component.

Lindsey Whittle’s installation room, with many elements of her form language, and her first use of reflective surfaces.

Finally, Whittle’s work blends wearable and installation art with a lexicon of idea-forms that the artist has developed as a kind of personal language over many years.

“All of the pieces I create have a performative component,” Whittle said at an artist talk at the Carnegie Art Gallery in Covington, Kentucky. Whittle is highly recognizable, prone to wearing home fashion adorned with colorful iterations of her felt or foam forms. Among Whittle’s works on display at the CAC are an installation of exuberant color and form, amplified by reflective mylar surfaces in a small bedroom off his main gallery space, and a row of acrylic puzzle sculptures. cutouts, which configure its form language into spiky, katamari-like dimensional standing structures. Video montages chronicle Whittle’s daily fashion challenges, including experiments with paper clothing and hook-and-loop work that physically connects people with a special hook-and-loop band that NASA developed to anchor people to surfaces and to each other in weightlessness.

Although some aspects of each artist’s works correspond to conventional notions of a museum exhibition, the majority of Archive as action lives in its participatory programs, its activated spaces and the contributions of visitors. Whether it’s the long tresses hung in Curreri’s gallery, the self-reported happiness demographics aggregated and re-presented by Cullen, or Whittle’s wild exhortations to shape fashion and self-presentation, the works of this exhibition require and successfully exploit the involvement of museum visitors. . One imagines that at a time when many museums are struggling to drive public engagement, a show like this will turn institutional heads in recognition of a powerful new model.

New exhibits at the Laguna Art Museum include lithographs by John Baldessari, animal sculptures by Gwynn Murrill and prints by Mexican American artists