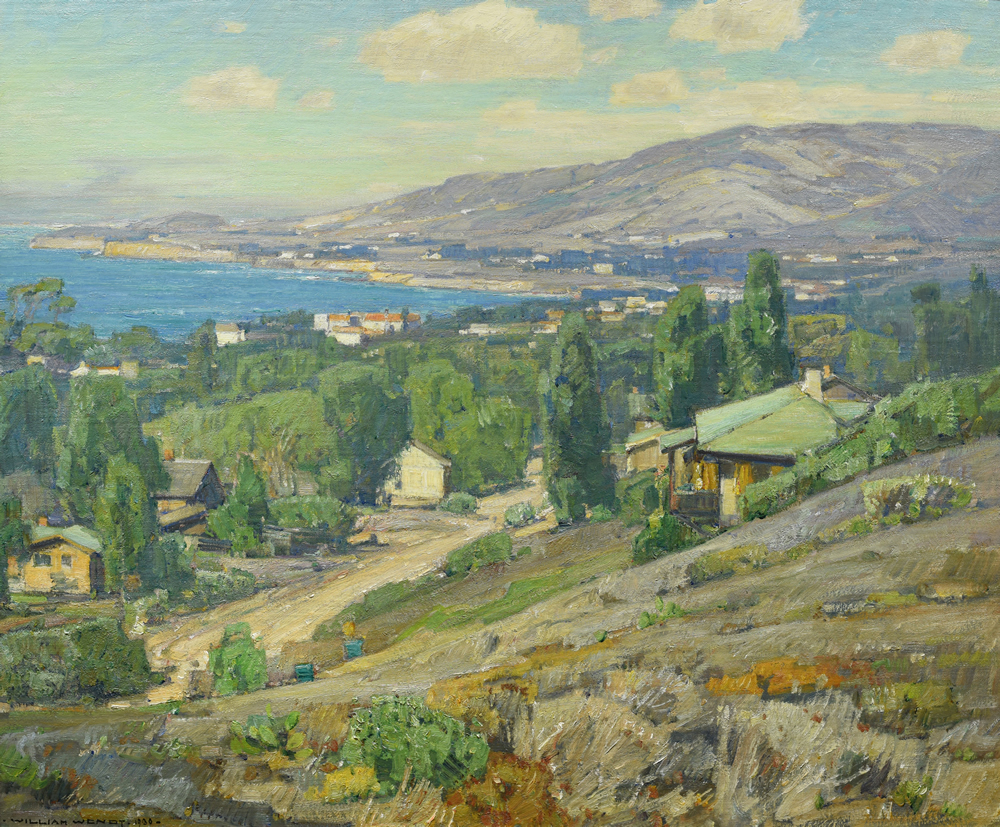 The Laguna Art Museum is on a roll with two tantalizing exhibits. The main galleries present the latest gifts planned for its permanent collection, a veritable assortment of works ranging from Californian Impressionists to more contemporary works collected under the title “From Wendt to Thiebaud: Recent Gifts from the Permanent Collection”.

The upstairs mezzanine features versions of Japanese haiku poetry and a visual interpretation of verses from “Stanton Mcdonald-Wright: The Haiga Portfolio”. Both are until May 29.

“From Wendt to Thiebaud”

Can a dress convey social movements? Cheryl Ekstrom (1943-2015) created a turn-of-the-century bronze dress without a body, but full of references to women’s lives that led to the feminist suffragette movements. Titled “Misplaced Heart with a Wolf at her Back,” Ekstrom’s 2012 sculpture involves women navigating at least two versions of their lives, one private and one for the public. The wolf represents the toll the process often takes and the heart of their courage.

The museum showcases its newest cache of acquisitions beginning with three paintings by William Wendt, including “Laguna Coast.” It shows a view of the start of Laguna Beach from Wendt’s house on Arch Street and the dirt road that would become busy Glenneyre Street. The trio is a welcome addition since the museum previously only had three small Wend landscapes. After devoting an exhibition in 2016 to Anna Hills, a pioneer of the Laguna Beach Art Association, the museum acquired two canvases, including the energetic “High Tide, Laguna Beach”.

In another order of ideas, “Mother’s Watchful Eye” reveals Joseph Kleitsch as a figurative painter. Here he captures his wife and son while still in Chicago before moving to Laguna Beach in 1919. The museum already has its iconic “Old Post Office.”

Then there are works that are oddly topical: Take “God Bless Mommy and Daddy and the John Birch Society” by local artist G. Ray Kerciu. The 1964 work refers to the far-right group that for a time defined Orange County politics. “Untitled White”, shows a Confederate flag with “WHITE” defaced. They were made in 1962.

Note also the works of Tony DeLap referring to his fascination with magic (“Florine, Child of the Air”, “Portrait of Queen Zozer II”) as well as the meticulous drawings of David Ligare (“Thrown Drapery”, “Sand Drawing”) which were seen here in a major 2015 retrospective. Then there is Thiebaud, who has donated or promised several works to the museum, including his spectacularly drawn “paint pots”.

All in all, it’s the kind of show that you can jump from one area of ​​interest to another without wasting time coming back to it more than once. A personal favourite? Timothy J. Clark’s watercolor titled “Italian Bicycle”, a painting that effectively combines meticulous representation with minimalist abstraction in the same composition.

“Cruel Heat, My Mind in a Whirl, I Listen to the Thunder Rumble,” says a haiku accompanying a colored woodcut by Stanton Macdonald-Wright. The museum exhibit was created in Japan in collaboration with the engraver Clifton Karhu.

This particular piece combines elements of representation and abstraction centered on a vortex of color and movement evoking the fury of an electrical storm as well as the turbulence of the mind.

Consisting of 20 uniformly beautiful prints, the collection is a gift to the museum from the Stanton and Jean Macdonald-Wright Estate and a proverbial promise to keep giving.

“After Issa, Rolling Stony River…” contains a similar energy even though the colors are more subdued blues, grays, greens and purples. The way Macdonald-Wright moves the action in a circular motion commands attention.

“Flying Butterfly, I Feel Myself a Creature of Dust” has a completely different vibe. Here, pastel-colored shapes with a dramatic addition of black are stacked vertically, their delicacy alluding to the fragility of life. The piece also recalls his cubist-inspired abstract precedents.

The haiku themselves appear stylized with two lines instead of more. The essence of such poetry, juxtaposition of disparate elements linked by a key word remains. For non-expert Westerners, it should suffice to study the beautiful images that illuminate the words. In a way, we get it.

“In the hand, the firefly makes a cold glow” at first seems strange until one looks at two joined hands cradling an amorphous form, the essence of the firefly. And then there’s a favorite, “Bright red sun sorely hot but the wind is autumn.” Here the undulating shapes evoke a summer storm, a last hurrah before the start of the cold season.

Macdonald-Wright, 1890-1973, was a pioneer of American abstract art who, together with the painter Morgan Russel, founded “Synchronism”, an avant-garde painting movement meaning “with color”, according to the writings. It was a fusion of abstract shapes and colors creating a sense of movement and traces of this mode of expression can also be found in some of the prints here.

After World War II, Macdonald-Wright became interested in Zen Buddhism and meditation, traveled to Japan where he established a home and by translating haiku into paintings and woodcuts, created a form of visual poetry . The Haiga on display were made in the 1960s.

Macdonald-Wright also maintained a home in Malibu, where he became a leader among the modernist community in Los Angeles.

The best museum exhibits in the United States this spring