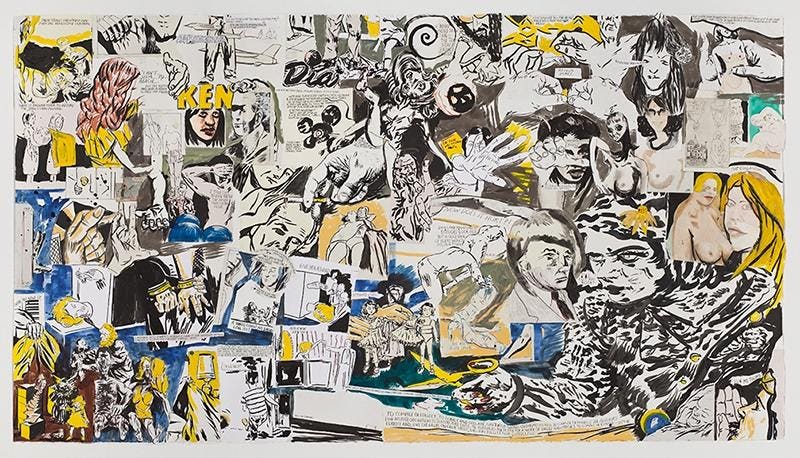 In 2017, I will see a demagogue take over the Oval Office, agonize over political headlines, and more than likely lose my health insurance. So what could he expect? Well, there is always art: doing it and assimilating it. I’m waiting for new films from Alex Ross Perry, James Gray and Sofia Coppola, not to mention Trainspotting 2, new records by artists like St. Vincent, The XX, Jesus and Mary Chain and Spiritualized, and many major art exhibitions. Art becomes more prescient in times of political upheaval and existential uncertainty. It gives us something to talk about. It can allow us to both escape and engage with the world. Here are some of the winter 2017 museum exhibits that will provide welcome respite from our hard-to-swallow new reality.

Raymond Pettibon: A pen of all work

American artist Raymond Pettibon has enjoyed a fascinating rise through the ranks of the art world hierarchy. For many of us who grew up with punk rock, Pettibon’s graphic work for big brother Greg Ginn’s SST records label (guitarist for Los Angeles hardcore punk icons Black Flag) was our first exposure to music. visual art of all kinds. Now represented by David Zwirner, Pettibon is undeniably one of the most important and celebrated contemporary artists in the world. Pettibon’s drawings uncover contemporary history through their unique interplay between image and text. Since the late 1960s, Pettibon has explored the failure of the American counterculture (and some of the manifestations of that failure: Charles Manson, Ronald Reagan and Superman) while playing a central role in some of its key movements: from punk rock to identity politics and everything in between. Almost shockingly, Pettibon has never been the subject of a major New York retrospective before. In February, The New Museum will present more than 700 drawings from the 1960s to the present day, a number of his self-produced zines and books, and several videos made with other musicians and artist friends (see Mr Drone directed by Pettibon and featuring the late Mike Kelley and Mike Watt of The Minutemen).

When the subject of human sexuality is explored by visual artists, a certain contradiction always lurks beneath the surface of the work. Artists usually create works to eventually show them to an audience. Because of this, a conceptual conceit will always blur the representation of sex in the work. Either the work will be deliberately provocative as in the work of Robert Mapplethorpe, or it will examine the gaze or media representations of sex itself, as in the work of Marilyn Minter. For this upcoming Museum of Sex exhibition, curator Frank Maresca has sought to show art that directly reflects the inner sexual worlds of its creators. To avoid the conceptual dilemma, he chose to select only works by foreign artists. The artworks in the exhibition reflect all the innermost sexual desires and fantasies of their respective creators and were made without the expectation of being shown to an audience. By removing the element of exhibitionism, the show offers a deeply private look at the artists’ sexuality. The work on the show ranges from what society would consider “normal” sexuality, as Eugene Von Bruenchenheim loves nude portraits of his wife, to the point of voyeurism and frightening. Many photographs of the Czech artist Miroslav Tichý, for example, are grainy, deconstructed images of women taken by the artist with his own homemade cameras. Like the great cinema of Hitchcock, Tichý’s photographs involve himself and the viewer in the sexual act of looking. And then there are the illustrations by Henry Darger. Darger was a caretaker at a Chicago hospital in the 20th century, and when he passed coroners found a 15,000-page book titled The story of the Vivian girls, in what is called the realms of the unreal, of the glandeco-angelian warstorm, caused by the rebellion of child slaves with hundreds of illustrations. Some of these illustrations depict acts of sexual violence and depravity against children, often seen as influenced by the abuse Darger suffered as a child. All of the sex in the exhibit is depicted without judgement, placing the viewer in the position to intuitively understand their own feelings towards the various manifestations of sexual desire.

The 1980s was a fascinating period in the history of art which saw the rise of the financial sector and its immense wealth give rise to what we today consider the “art star”, or artists who were famous beyond that of the art world and into the world of celebrity. While it seems that the postmodern work of Cindy Sherman, Robert Longo and Richard Prince defined the era while predicting the next, it’s hard to deny that the time-tested medium of paint has devoured an equally large share of the market for art in the 1980s. The Whitney Museum Fast forward The exhibition focuses directly on painters of the decades, from the neo-abstract expressionism of Basquiat, the figurations of Eric Fischl and the early postmodern painting of David Salle. The exhibition also highlights less famous but equally talented painters of the time, such as Julia Wachtel whose oil paintings mining pop culture often have more in common with artists of the “Pictures Generation” ( Sherman, Laurie Simmons, Barbara Kruger) than his painter contemporaries, and Joyce Pensato, whose massive and explosive paintings of cartoons and comic book characters have only recently won international art fair acclaim. The exhibition focuses on painting at a time when the artistic necessity of painting was being debated, ultimately serving as an unintended precursor to The Whitney’s highly anticipated David Wojnarowicz retrospective this summer. Wojnarowicz, of course, started out in graffiti and later created incredibly intricate paintings and murals inspired by street art, but when he contracted HIV in the late 80s, he began to fear that he would never be able to create fully expressed images. his rage and fear through painting. Eventually he switched to photography and created some of the most evocative black and white photographs of the decade. The Whitney will explore the purpose of painting in a world of digital photography throughout the year, it seems. I don’t know about you, but it’s always a debate that excites me. The entire exhibit will be taken from the museum’s extensive archives.

The Metropolitan Museum of Art

20th-century American modernist painter Marsden Hartley’s connections to Germany, Nova Scotia and New Mexico have all been celebrated in previous exhibitions, but it was his home state of Maine that provided the landscape for the development. Hartley’s artistry as well as a source of inspiration. In the exhibit, Hartley’s early post-Impressionist landscapes of the state that devoured his early artistic productions will be displayed alongside works from the latter days, including his grainy painting of the state’s interior as well as his portraits of the eccentric inhabitants of Maine (if you think Barbara Kruger characters of mid-twentieth-century New York, strange as it may seem, you’ve certainly never been to rural Maine). The Met, in its initiative to explore modern art in the context of art history, will also explore the work of artists important to Harley’s development: French modernist Paul Cézanne, Japanese engravers Utagawa Hiroshige and Katsushika Hokusai, and American painters Winslow Homer and Albert Pinkham Ryder.

Although it is not exactly an exhibition, Anne Teresa De Keersmaeker Work/Work/Arbeid is a three-day performance at MoMA that asks the question “can choreography be done in the context of a museum?” MoMA’s schedule is currently continuing a series of already stunning exhibitions by artists like Nan Goldin, Tony Oursler, and Francis Picabia, so this restrained performance provides a welcome bridge until the museum launches a massive Rauschenberg retrospective in the spring. Keersmaeker is a modern dancer who uses form and structure to create emotion on stage. His 2013 swan song, Vortex Timing, will be condensed into nine-hour cycles for the MoMA performance. The original performance lasted nine days. The show will force viewers to consider modern dance as an aesthetic discipline.

Science museums and UNESCO partner to achieve the SDGs