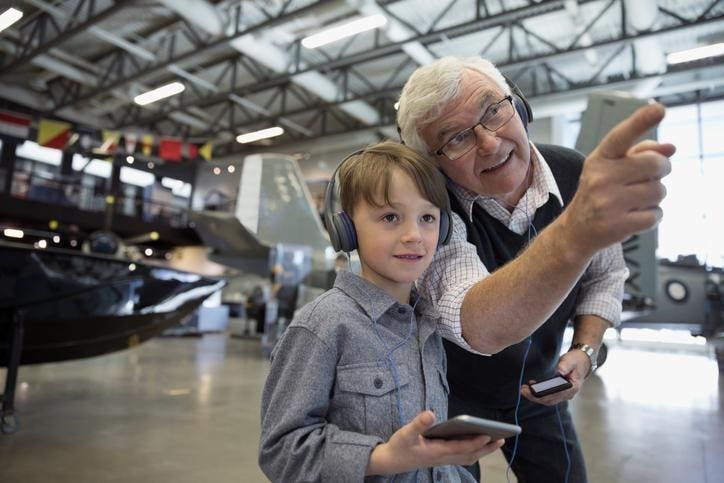 As the weather gets colder, indoor activities start popping up. Here are six museum exhibits worth checking out this fall, from coast to coast.

“Our Senses” at the American Museum of Natural History in New York is a fun and immersive exhibit that explores the limits and possibilities of human perception and how it affects our view of what is real. Visitors enter and explore 11 funhouse-like spaces that trigger the senses in fun and sometimes confusing ways. The goal is to educate us about how the brain collects and processes sensory information and uses it to shape how and what we see. You can visit “Our senses” until January 2, 2019.

“Unseen Oceans,” also at the American Museum of Natural History, is open through Aug. 18, 2019. It features videos and images from the ocean floor to give visitors a look at the fantastical creatures that make up alien habitats. without light from the bottom of the ocean their homes. An immersive theatrical presentation will give you a sense of what it’s like to descend in a submersible into those deep ocean regions where no light shines. You will also learn a lot about the current state of ocean research.

The largest ship in the world when commissioned in the aftermath of World War II, the aircraft carrier USS Midway served in the Vietnam War and as the flagship of Operation Desert Storm. Since its dismantling in 1992, this floating city has functioned as one of the largest naval museums in the world, providing insight into life at sea for Navy personnel.

Open year-round, the USS Midway Museum reveals some of America’s most significant naval actions of the past century, and you’ll get to experience San Diego’s waterfront at its best.

A Cutting-Edge Arts Destination in Massachusetts

Head to a former industrial town in the Bay State for “Thumbs Up For The Mothership,” a multimedia collaboration between New Orleans-based conceptual artist Dawn DeDeaux and Lonnie Holly, a self-taught sculptor and musician from the ‘Alabama. Now on display at the Massachusetts Museum of Contemporary Art (MASS MoCA), the exhibit turns abandoned rocking chairs, old garden hoses, stray branches and other ephemera into art. The artists seek to make a point of the society’s relationship with the planet – the show’s title mothership. This exhibition will be open at least until the end of 2018.

Don’t rush out of town after seeing this show. North Adams, Massachusetts, has become a veritable destination for art lovers since MoCA, the world’s largest museum of contemporary art, opened in 1999 in a converted mill complex. You’ll easily fill a weekend enjoying everything from bustling restaurants to smaller cutting-edge art galleries.

“Keepers of the Flame: Parrish, Wyeth, Rockwell and the Narrative Tradition” examines the work of legendary illustrators, exploring how their work relates to the European realist tradition. Eighty-five works by Maxfield Parrish, NC Wyeth and Norman Rockwell are on display, including some of their best known. You will also be able to see works by the European masters who influenced this quintessentially American trio of artists. Check them all out at the Norman Rockwell Museum in quaint Stockbridge, Massachusetts, in the Berkshires. But hurry, you have until October 28 to see this exhibition.

When Dinosaurs Roamed the South Pole

At the Field Museum in Chicago, “Antarctic Dinosaurs” is on display until January 6, 2019. It explores Antarctica 255 million years ago, when it was still a lush forest habitat where gigantic reptiles roamed. The recently discovered fossils of a species of dinosaur completely new to science are a highlight of the show.

The exhibition also chronicles crucial past and current expeditions, offering insight into the challenges their members have endured in order to shed light on the history of the lost continent.

The city of angels through the eyes of its children

“Unshuttered: Teenagers reframe life in Los Angelesspotlights the daily reality of Los Angeles life as local teenage photographers capture it through their lenses. Twenty-three high school students from the SoCal megalopolis contributed to this exhibit at the J. Paul Getty Museum in Los Angeles, each exploring a social issue he or she found personally important.

A photographer’s work, for example, examines the realities of vulnerable young people navigating the local childcare programme. Another teenager, the daughter of a street vendor, documents the lives of undocumented women in the city. The exhibition is visible until January 20, 2019.

With more than 6,800 instruments under one roof, the Music Instrument Museum in Phoenix, Arizona features the best pieces from around the world, on display year-round. An added attraction is its fall 2018 concert schedule, which features 50 artists including Stephen Stills, Judy Collins, Tower of Power, John Paul White and Bobby McFerrin.

This is just a small sample of what American museums have to offer this fall. If none of these museums are located near you and you can’t drive to see them, check your local listings to find out what’s near you.

Brian Sodoma is a journalist who covers business and health. He lives in Arizona.

This article is for educational purposes only and is not intended to provide medical or legal advice, or to indicate the availability or suitability of any product or service for your particular situation.

Capital One does not provide, endorse or warrant any third party products, services, information or recommendations listed above. The listed third parties are solely responsible for their products and services, and all listed trademarks are the property of their respective owners.

museums, events and conferences in Oxford - The Oxford Student