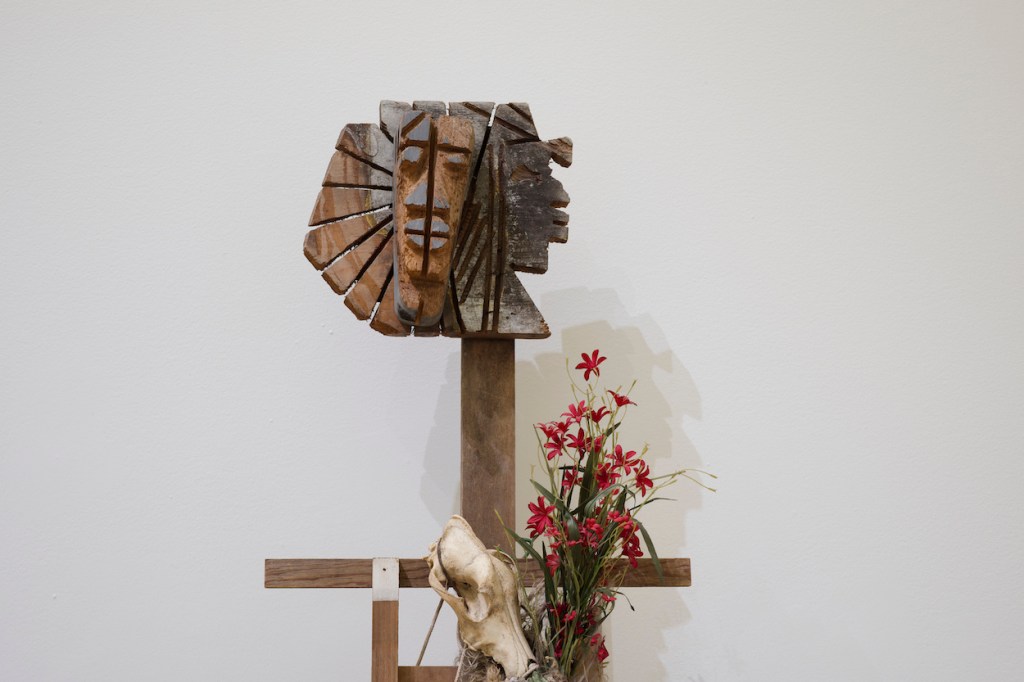 Lonnie Holley came to art via gravestones. In 1979, when her sister lost two children in a house fire, Holley dealt with her grief by chipping stone, carving headstones for the graves of her niece and nephew. Thereafter, he continued to make sculptures and eventually began to work with other materials, such as wood, barbed wire and animal bones. Despite their formal eclecticism, these pieces share one purpose: they suggest jagged totems for departed spirits. At the Morgan Library & Museum in New York, in the exhibit â€œAnother Tradition: Drawings by Black Artists from the American South,â€ one of Holley’s assemblages served as a conduit for the dead. Occupying a corner of a small square gallery, The throne of the ancestors is not strong enough not to have a rock or a crack (1993) was an elegant seat for memento mori â€“ a mottled skull, fake flowers â€“ as well as mojos, charm bundles that provide access to sacred and ancestral powers. The wall tag quoted Holley: â€œIf we lose respect for where we come from, we are. . . on the way to losing grip on reality. And art allows us to keep this grip.

In â€œAnother Tradition,â€ Holley joined a group of performers clutching their mojos tightly. Although Holley’s cluttered throne took up the most space, the main focus of the exhibit was to showcase eleven drawings that the Morgan acquired in 2018 from the Souls Grown Deep Foundation, which champions the works of over 160 southern black artists. The acquisition includes five Souls Grown Deep artists: Thornton Dial, Nellie Mae Rowe, Henry Speller, Luster Willis and Purvis Young. In addition to Holley’s sculptural intrusion, “Another Tradition” also featured loaned works by Sister Gertrude Morgan and Bill Traylor. The selections dated from approx. 1939 to 1996 and passed through such distinct Southern cities as Montgomery and Miami; what connected these works more than geography or chronology was a common interest in the spiritual heritage of black slave descendants.

In an untitled work from 1978, Rowe used pen, paint, and pastel to embellish and frame a black-and-white photograph of herself standing in her yard. Dense blue ink shades a path under the artist’s feet, the seat of the chair behind her, and some of the foliage around her. The caption referred to Rowe’s ‘idiosyncratic’ take on the African bottle tree: instead of hanging the traditional cobalt blue bottles meant to catch wayward spirits, she placed Christmas decorations on the trees around her house and lined the aisles with bottle caps. But if cobalt is used to catch spirits, Rowe has color-coded an entire garden for them here.

The blues persisted throughout “Another Tradition”. by Traylor Blue construction, orange numbers (circa 1939-1942), focuses on a graphic cobalt-colored structure that could be a ship and a mast. Or a reverse cotton press. Or a tree with bare branches. The ambiguous form oscillates between eerie and playful, due to the simple ocher figure hanging from it (does it wave in alarm or salute?) and the orange dog guarding it (as a protector or guardian ?). Traylor was born into slavery in the mid-19th century. Even without the hint provided by the eye-catching blue, this lineage would still haunt its sparse design.

Elsewhere the human figures were themselves delightfully ghostly, as in Dial’s Life goes on (1990), The ladies stand by the tiger, and Posing movie stars holding the bird of freedom (both in 1991). In each of these watercolor and graphite works, oblong women bend like plumes of smoke. In posing movie stars, two of them (pale cerulean this time) grasp the large red and yellow â€œbird of freedomâ€ from the title of the work. Like Traylor’s central form, the bird has a somewhat obscure name, but its colors and shape still remind this viewer of the Sankofa bird, a powerful symbol for the Akan people of Ghana that permeated the diaspora. Sankofa means recovery, and the saying goes, “It’s not taboo to go back and recover what you’ve forgotten.”

Dial’s bird, however, does not cock its head back in the classic Sankofa form. Instead, in another twist on the tradition that was featured in this exhibit, the bird stands upright. Women are those who bend their necks back; one of them turned upside down as she held the animal aloft. The curve of its chin follows that of the bird’s arched back. The other movie star’s arm mimics the curve of his neck; her cheek presses into the breast of the bird of freedom, the yellow watercolor of her bleeding plumage in the blush of her cheek. In this exhibition, freedom and recuperation also merge, in works that retrace history to better understand, if not transcend, its wounds. In Dial’s drawing, the three figures appear as appendages to each other, like a new type of totem, whose liberating power is not distinct but rather embodied by its practitioners. Go back and get what you forgot, says the Akan proverb. Keep this hold, said Lonnie Holley, to where we come from. The artists of “Another Tradition” couldn’t let go if they tried.