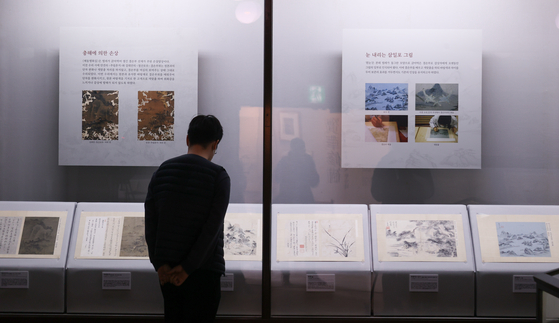 A visitor looks at cultural heritages that have recently finished receiving preservation treatments at the ‘Bohwasubo’ exhibition, the first exhibition in seven years at the Kansong Museum of Art, also known as Bohwagak, in the district of Seongbuk in central Seoul on Friday during the exhibition’s pre-opening. [YONHAP]

Kansong Art Museum, also known as Bohwagak, in central Seoul’s Seongbuk district, opened for the first time in seven years and five months for an exhibition titled “Bohwasubo” on Saturday. The art museum was established in 1938 during the Japanese colonial period (1910-45) by legendary art collector Kansong Chun Hyung-pil (1906-1962). Kansong is Chun’s pseudonym.

The museum held its first exhibition in 1971 and had held two exhibitions a year, free of charge, each spring and fall for two weeks each. Then, in 2014, he ventured to Dongdaemun Design Plaza (DDP) in central Seoul, holding paid special exhibitions on a larger scale until early 2019. The museum had suspended all operations since then.

“We hope to start with a clean slate,” said Chun In-keon, the director of the art museum run by the Kansong Art and Culture Foundation, known for its closed and old-fashioned way of doing business. “We will communicate more actively with the public about what is stored and how items are taken care of.” Chun is the eldest grandson of Chun Hyung-pil.

The move comes after the Kansong Art and Culture Foundation was able to largely, ‘but not completely,’ ease its financial woes after selling the portable gilt-bronze Buddha Triad Shrine, a state-designated national treasure. , to HeritageDAO, a cryptocurrency-decentralized autonomous organization (DAO) founded by a Korean-American.

The foundation has created a huge stir after auctioning four national heritages – two treasures and two national treasures – since 2020. which received no bids at auction in January, was bought by HeritageDAO last month.

The cryptocurrency company returned physical custody to the foundation with a 51% stake in the treasury, but many audiences and art historians have still expressed concern over the commercialization of Korea’s important national heritages. The foundation was also embroiled in controversy last year for creating an NFT (non-fungible token) version of “Hunminjeongeum,” a national treasure.

“It was like cutting my arm,” Chun said with a lump in his throat Friday at a press conference held at the Kangsong Art Museum. “[The Kansong Family] will never auction Korea’s national heritage again, ever again. »

Chun said that unlike other large private museums, the Kansong Art Museum “has no source of income.” 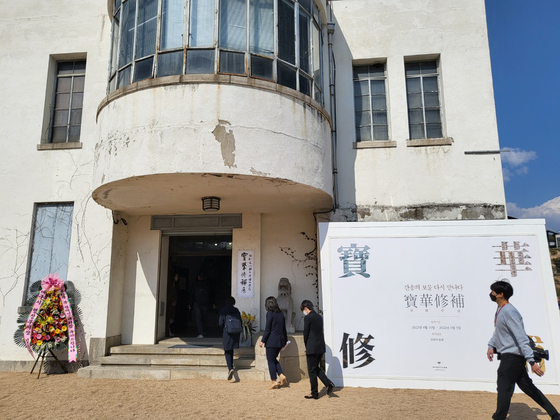 Bohwagak is a registered national cultural heritage. It will be under renovation after the end of the current “Bohwasubo” exhibition, which started on Saturday, June 5. [YIM SEUNG-HYE]

“[The Kansong family] does not have to pay inheritance tax for state designated treasuries, but we have so many undesignated estates that are still very important and valuable and are subject to inheritance tax. It was inevitable for us to settle the growing debt to keep the museum going,” Chun said. “Fortunately, the situation has now stabilized and we will work very hard to ensure that such an incident which concerns the public does not happen again in the future.”

Over the past three years, when the art museum was not in operation, it built a new underground storage space to better protect and preserve the approximately 2,000 national heritages it owns, including 12 national treasures . The new storage space was built thanks to the Cultural Heritage Administration’s project to support the preservation of private organizations that own a large number of cultural assets.

The Kansong Art Museum has started to reorganize the hundreds of cultural properties that were at risk of damage due to the old and outdated facilities in Kansong.

“We have been able to perform conservation treatments for around 1,000 items since 2020,” Baek said. “I don’t think the Kansong Art Museum lags behind in the number of exhibitions it has held or in its vast collection. But we recognize that in terms of conservation, it was insufficient and we received a lot of criticism.

The exhibition features 32 items from those 1,000. Baek said the exhibits were “carefully selected”. 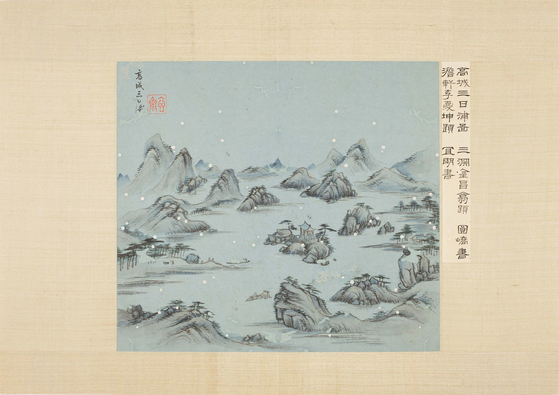 “We were able to discover the two additional works belonging to this collection after witnessing the same vermiculation – or insect marks,” said Lee Ha-na, curator at the Kansong Museum of Art.

“Seashore of Samilpo”, a painting by Shim Sa-jeong (1707-1769) is also on display. It looks like the artist painted the snowy scene of Samilpo, but in reality the white dots are marks left by insects. Lee said the painting is so well known for this “snow scene” that the preservation team decided not to paint over the marks, although most of Haedong Myeonghwajip’s other works with insect marks have suffered. preservation treatment. 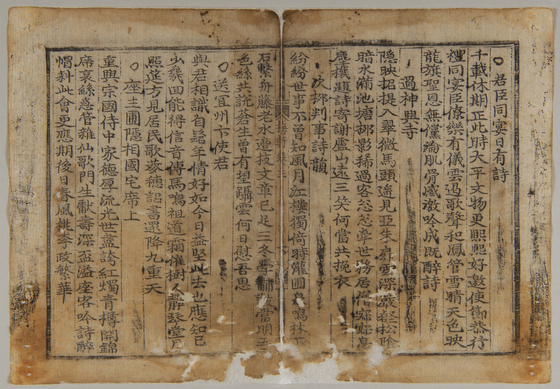 Another important piece on display is the first edition of Maeheonjip, a collection of literary works written by Kwon U (1363-1419). This woodblock text was produced in 1452 and is a rare literary work of middle Joseon. During the preservation treatment, researchers were able to discover that the traces of words related to Jeong Mong-ju (1338-1392), a scholar of the Goryeo dynasty who was eventually executed by Taejong Yi Bang-won, the third ruler of Joseon, had intentionally erased or torn out, and later rewritten again.

“It appears that the records of these politically sensitive people at the time this first edition was produced were deliberately withheld,” Lee said.

Visitors can go up to Bohwagak’s second floor, but its antique-looking showcases on the floor are empty.

According to Lee, Bohwagak will undergo renovations when the exhibition ends on June 6. An elevator will be installed and the windows will be modified to better display cultural heritage.

“Although this floor is empty, we wanted visitors to come here and experience the old display cases that have been used since the first exhibition in 1971 and what they looked like before the renovation, as Bohwagak itself is a registered national cultural heritage “, added Lee. . 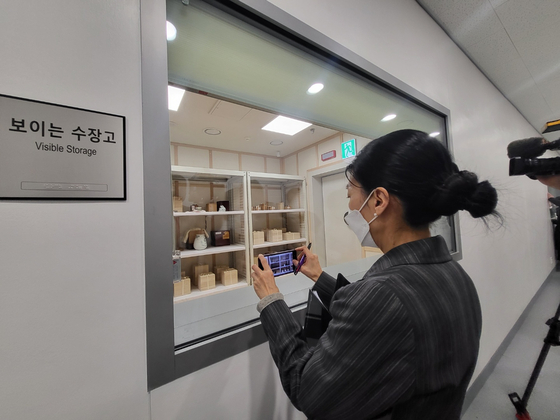 On Friday, researchers work to preserve the cultural heritages of the Kansong Art Museum in its new preservation treatment room. [YIM SEUNG-HYE]

Visitors will also be able to see part of the newly established storage under the museum. Through a window, visitors can see how Kansong’s cultural heritages are preserved. Visitors can also see researchers performing preservation treatments in the Visible Storage exhibit. 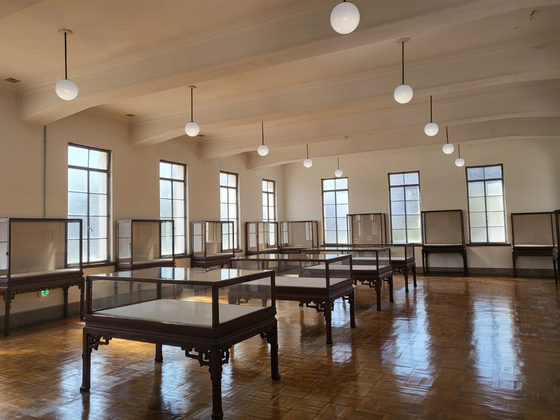 The second floor of Bohwagak is left empty so visitors can see its old display cases and feel the atmosphere before it is renovated after the current exhibition ends on June 6. [YIM SEUNG-HYE] 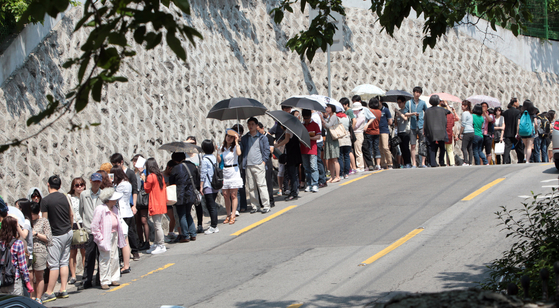 A long line of visitors waits to enter the Kansong Art Museum in May 2012. [YONHAP]

Bohwagak’s exhibits were known to attract so many visitors that a long line of people waiting outside the art museum was one of its most well-known features for many years. But for the first time, the art museum has adopted an online reservation system. Visitors should make an online reservation to visit the museum on the Kansong Art and Culture Foundation website, kansong.org. The exhibition is free.

Bohwagak opens from 10 a.m. to 6 p.m. Seventy people will be allowed to enter the museum every hour.

14 of Indiana's Most Unique, Quirky, and Unreal Museums