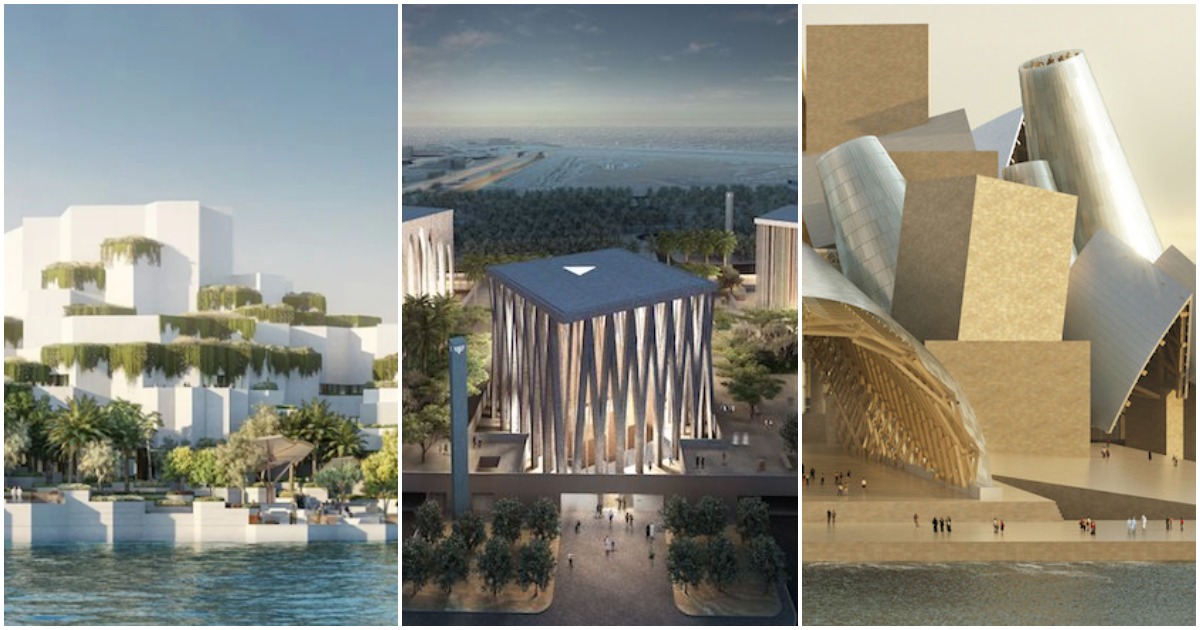 Newcomers to the cultural club of the capital…

Saadiyat Island could easily manage on its own. With its rugged sun-bleached beaches, turquoise waves, dolphin and turtle inhabitants and bustling foodie district, it’s a very easy place to fall in love at first sight. But its beauty goes deeper than that. The ongoing Saadiyat Cultural District project organizes a network of museums, galleries and heritage sites that are just as remarkable as the priceless collections they contain. Places of learning, places of appreciation and awe, places that honor the past and celebrate the future.

When completed, the Saadiyat Cultural District will be one of the densest and most relevant cultural centers in the world. If you’re curious what’s to come, these are all the confirmed builds currently underway.

Scheduled for completion in 2024, Phenomena is a collaborative effort between DCT Abu Dhabi, Miral and teamLab – and the result, as you can see from the renders, appears to be an engineering masterpiece. The architectural marvel represented by the building is more than superficial. The futuristic-looking space will span a 17,000 m² gallery and is meant to become the “home of infinite curiosity”. But what does that really mean? It’s a pretty cool concept, the collections inside will be organized around a theme of ‘environmental phenomena’ and ‘providing new perspectives on the world’. The real genius here is that the exhibits will be shaped by the changing environment and, like their organic inspiration, will grow and evolve as they mimic the subject matter. Each piece will be designed to respond to its specific local environment within the teamLab Phenomena building and the interactions it encounters. This ever-changing virtual world means that every visit, by every customer, will result in a different experience.

When completed, the Zayed National Museum will represent nothing less than an architectural marvel, a fitting home for the inspiring story of our nation and its visionary founder. Located on Saadiyat Island, already home to so many cultural imports, the breathtaking structure designed by Foster + Partners will feature a 123-meter-tall tower. The main gallery will be devoted to a collection of artifacts illuminating aspects of Sheikh Zayed bin Sultan Al Nahyan – the man and his leadership journey, the unification of the country and beyond. There will also be gallery space dedicated to falconry and conservation exhibits; land and water; History and Society; science and learning; Faith and Islam; and it will house the Sheikh Zayed Grand Library. Although we don’t have an expected completion date, work on the building began in 2019.

On track for completion in 2025, the Frank Gehry-designed Guggenheim Museum will add a jagged smear of fainting to the skyline of the Saadiyat Cultural District. True to the spirit of Guggenheim (and designed in collaboration with the Solomon R. Guggenheim Foundation), the plans for the building – cut through a contemporary design that is unconventional, yet singularly beautiful. As outside, so inside. Inside, you’ll find 28 galleries over an area of ​​11,600 m², plus a further 23,000 m² of exhibition space contained within the distinctive cones and terraces attached to the building. Guggenheim Abu Dhabi will exhibit a collection of modern and contemporary art with a particular focus on pieces from the West Asia, North Africa and South Asia (WANASA) region. The museum has been tasked with providing a platform for artists from the WANASA region, commissioning works by artists at the forefront of creative innovation, and illuminating how “interconnected histories and cultures” have contributed to shape our world. Speaking about the project, HE Mohamed Khalifa Al Mubarak, Chairman of DCT Abu Dhabi, said: “The museum will also play a civic role through its mission to foster greater interest in global modern and contemporary art, fostering diversity and inclusion in a meaningful cultural exchange. . As we move forward with our plans, it is crucial to recognize the impact of this museum in achieving our vision for the culture and creative industries of the emirate.

Located on Saadiyat Island, the Abrahamic Family House is a mega project with an incredibly inspiring message. Inspired by the Document on Human Fraternity, overseen by the Higher Committee of Human Fraternity, and “monitored closely by Pope Francis and the Grand Imam” – the Abrahamic Family House will include a mosque, a church and a synagogue in the same space. The building was designed by architect Sir David Adjaye, to capture “the shared values ​​between Judaism, Christianity and Islam”. The effort was first announced in 2019 by His Highness Sheikh Abdullah bin Zayed Al Nahyan, Minister of Foreign Affairs and International Cooperation of the United Arab Emirates, but this latest update gave us the names of the centers of worship. In the house of the Abrahamic family, you will find the Imam Al-Tayeb Mosque, the Church of St. Francis and the Moses Ben Maimon Synagogue. The goal is for this project to symbolize and inspire tolerance, unity, brotherhood, mutual respect and peaceful coexistence.

One of the biggest cultural news items so far this year is DCT’s confirmation that Abu Dhabi is getting a natural history museum. It will be the fourth museum in the Saadiyat Cultural Quarter (after the Louvre Abu Dhabi, the Zayed National Museum and the Guggenheim), and is set to open on Saadiyat Island in 2025. In addition to captivating exhibitions held to illuminate the The universe’s 13.8 billion years of original history, the site will also include a scientific research center “which will undertake studies in zoology, paleontology, marine biology, molecular research and earth sciences”. The project was announced by Khaled bin Mohamed bin Zayed and promises “to help find solutions for the future of our planet”. We also have context confirmation on two of the star objects of admiration – Stan, a 67 million year old tyrannosaurus rex skeleton; and the seven-billion-year-old Murchison meteorite (these two specimens will be on view at a special exhibition at Manarat Al Saadiyat between April 6 and May 12 this year).

Even more at the Louvre

The Louvre Abu Dhabi represents the cultural epicenter of the emirate, but after some truly stunning news from local master developers, Aldar, it could soon represent the epicenter of your living room too. When completed, the Louvre Abu Dhabi Residences by Aldar will be a 400-apartment residential complex, with an iconic address, stunning ocean views and neighbor status next to one of the art and museum collections. most impressive historical objects in the world. The structure will include Le Salon Détente – a lounge for residents that will showcase works of art curated in consultation with Louvre Abu Dhabi experts; a 12-seat Private Cinema for a private theatrical experience; a wellness center – Spa Bien-être which will of course include a gym, saunas, yoga and meditation areas; and there will also be an indoor children’s playroom, aptly called the Creativity Room. It’s all part of Saadiyat Grove, a 242,000 square meter, Dh10 billion development that will also include retail and entertainment attractions, other residential properties, two new hotels and co-working spaces.